All students who live within the home zone described below shall be eligible to enrol at Clearview Primary.

Addresses on both sides of boundary roads are considered in-zone unless specified otherwise.

Each year, applications for enrolment in the following year from in-zone students will be sought by a date that will be published by public notice in a medium appropriate to the area served by the school.  This will enable the board to assess the number of places that can be made available to students who live outside the home zone.

Proof of residence within the home zone will be required. 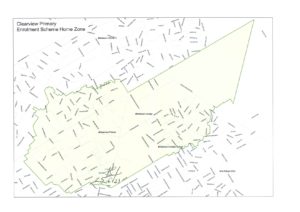 This provision has been approved under Section 75 1(a) of the Education and Training Act 2020.

For families of currently enrolled students whose addresses become out of zone as a result of the amendment to this Enrolment Scheme.

Section 75 of the Education and Training Act 2020 states that:
“the Secretary may authorise an enrolment scheme to permit a student to enrol at the school as if the student lived in the home zone of the school if, –

(a) in the case of an existing enrolment scheme whose home zone is amended, –

If applying for enrolment under this part of the Enrolment Scheme, the sibling’s name and evidence of a sibling relationship may be required by the school.

Section 75 of the Education and Training Act 2020 sets out the definition of a “sibling” for these purposes.

The school will maintain a list of students enrolled at the time of the implementation of the enrolment scheme change by the Board in order to enable determination of eligibility to enrol under this provision.

Note: That this is a very tightly defined definition.  It would not apply to:

Out of Zone Enrolments

Applications for enrolments will be processed in the order of priority specified in the Education and Training Act 2020.

Before the application deadline associated with each pre-enrolment period, a Board must, by public notice in a medium appropriate to the area served by the school:

If there are more applicants in any priority group than there are places available, selection within the priority group will be by ballot conducted in accordance with instructions by the Secretary, under Schedule 20, Clause 3 (1) of the Education and Training Act 2020.  Parents will be informed of the date of any ballot by public notice in a medium appropriate to the area served by the school.

The BoT are not taking any out of zone applications at the moment.

Update Information
Please remember that if you change your home, work or cell phone number, address or email please let the school office know so that we can update our database.

Student Absences
Please ensure you contact the office if your child is absent. The best way to do this is to use the Smart Phone App or ring (347-7025) and leave a message with the reason.
Click HERE to access the link to the Smart Phone App.

Clearview Travel Plan
Please take note of our Travel Plan to help ensure the safety of our students.
Request: Please do not park on the paddock opposite our school on Broadlands Drive. A new footpath has been installed along there and it’s not built to withstand vehicles.  A reminder that the school carpark is restricted to Staff, Shuttles and Disabled Parking only.
Thank you for your support with this.

Lost Property
Please take the time to ensure all uniform items, jackets, drink bottles and lunchboxes etc are named otherwise we cannot get the items back to their owners.

Until the 15th April receive a bonus $10 or $20 Countdown or JB HiFi voucher with your purchase.

Valid for 12 months from activation and downloadable on up to 4 devices.
Orders can be placed at https://nz.entdigital.net/orderbooks/136s884

Five to Nine Cafe
Come and say hello to our Cafe Manager / Barista Vanessa and grab yourself a drink as you drop off your children. Lovely cafe room to sit down and relax, or grab a drink on the run.  Open from 8.00 – 10.00am.

A Day At Clearview
At the start of 2015 we shared a video that Tony Stewart created to show the amazing things that happen at Clearview each day.  To check it out, click on this link: http://youtu.be/j1HzyfHMwrU